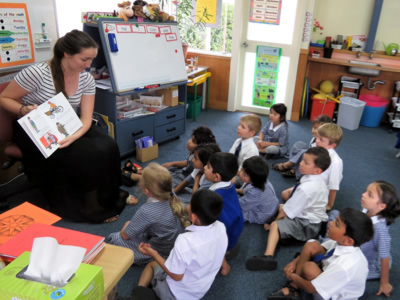 Last year, I was incredibly lucky to be given sponsorship by the ERT to spend eight months teaching in New Zealand at Ficino School, Auckland. This was a very last minute decision, as I found myself with a year off while changing my degree course, and so it was with some surprise and trepidation that I found myself on a plane to the other side of the globe.

Despite my nerves, working at Ficino turned out to be one of the best experiences of my life. As it’s such a small school, I was able to properly get to know all of the children there and really felt like I was making a difference. I was involved with all the classes in the school, particularly acting as assistant teacher to Year 1. I was also given the responsibility of teaching Sanskrit to a group of new pupils in years 6 and 7. Planning and taking their lessons was fantastic teaching experience, and I found it great fun. It was a steep learning curve for me as I had to learn to think on my feet and manage a classroom and keep the children engaged. This was particularly difficult in sports lessons, where I was once given a group of six-year-olds to teach tennis skills, when I was as clueless to the rules of tennis as any of them. 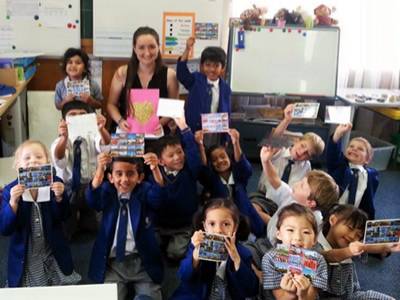 One of the highlights of the school year was the Year 7 and 8 play, and I was given the chance to act as an assistant director to their production of ‘A Midsummer Night’s Dream’, as well as helping out with hair and makeup on the performance nights. I had performed in many productions before, but never worked backstage, so it was a new experience for me and one I found myself really enjoying.

Working as a teacher came with the unexpected bonus of accompanying some incredible school trips. The best of these was with the same Year 7 and 8s to Tongariro National Park, where we completed the Tongariro Crossing together. This is a 19.4km hike up and over Mount Tongariro, which is part of a volcanic range in the North Island and is one of the most famous treks in New Zealand. We started out bright and early and were soon striding up the slopes to the lower crater, which we found full of cloud so that you could only just make out the people in front as we crossed. Once we scrambled up a scree slope, we came out of the clouds and found a fantastic view of the other mountains laid out on either side. The ground at the top of the trail was warm to the touch and as we went further we spotted alarming steam vents and skirted bright green sulphur lakes. To my surprise, I found the descent harder than the climb, perhaps because we could see the distant woods that marked the end of the trail far in the distance as we zig-zagged our way slowly down. I found myself at the back of our group for most of the trek with some of the younger children, who kept up a cheerful stream of encouragements and chatter to each other and myself. Their enthusiasm made the experience even more enjoyable, and we shared in the triumph of finally reaching the end of the hike. 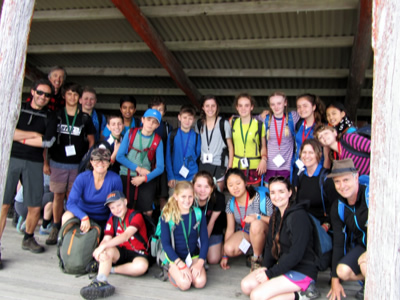 Since I was in New Zealand, I decided to do some of my own exploring and was incredibly grateful for the sponsorship money I had been given by the ERT as this allowed me to realise my plans. I travelled all over New Zealand, and had amazing experiences and met fantastic people. Some of the best experiences included a hike on Franz Josef glacier, trips into Waitomo’s glow-worm caves, and horse-trekking in Glenorchy river valley beneath the incredible mountain ranges which appear in the Lord of the Rings films. I also spent two weeks in Sydney, exploring the city and attending the School of Practical Philosophy’s Youth week. My sponsorship also enabled me to spend a few days in Japan on my return home, where I stayed in a small city called Nara, which is home to the largest bronze statue of the Buddha in the world (49ft!) and also to hundreds of tame sacred deer.

Since returning to university, studying Classics at Exeter, I have realised how much this experience has meant to me and how much it has changed me. So long away from home pushed me to develop my confidence and to learn to take all the opportunities that come my way. These skills and attitudes have made an incredible difference to my first year, giving me the assurance to try out new things and really get involved in university life. I would like to thank the ERT enormously for making this opportunity possible for me and enabling me to have these incredible experiences, none of which would have been possible without their support.