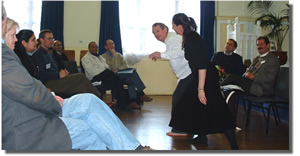 The ERT team were in Leyton, East London at the start of the Spring term. We went to deliver No. 4 in the series of ‘In Service Teacher-Training’ (INSET) days for state primary schools, funded by the Esmée Fairbairn Foundation. We call the day ‘Getting in Touch with the Inner Child’.

Our hosts were St Joseph’s Roman Catholic Junior School and Edinburgh Primary School. Both schools serve areas of social deprivation. About half the 255 children at St Joseph’s are from families of African and Caribbean heritage, and at Edinburgh School about half the 190 pupils are of Pakistani heritage. The two heads had started a programme of collaboration to try and dissolve the mutual suspicion between their respective parent bodies. For instance, most of the Catholic parents refused to allow their children to go and see inside a mosque as part of their religious education.

When they heard of the ERT INSET programme both head teachers jumped at the chance to hold a joint day, where the whole staff from each school could join in. It would be a good beginning to the new year, and an excellent way to deepen the collaboration.

So David Boddy, Paul Moss, Ian and Marie Wood, and Hugh Venables travelled east on London Underground’s Central Line on a cold January morning. We met a warm welcome in St Joseph’s newly-built assembly hall, and set about exploring with the 45 teachers what qualities of body, mind, heart and spirit we might want to see in a 10-year in our care. We practiced the stillness exercise and Ian and Marie Wood put everyone through their paces in a mime and movement session which sharpens the attention and raises awareness – after you’ve got over the initial embarrassment…

Several weeks later our professional independent assessor, Peter Jenkins, went to interview some of the participants and evaluate the day. How did the schools rate the INSET? This is what he reported:

St Joseph’s now holds a regular meeting at 8.30, to which all staff are invited. It includes silence and reflection. They use the pause in assemblies and lessons, and especially to start activities after playground time. Teachers at both schools say it helps them maintain a professional attitude to their work, even under challenging situations. They spoke of a spiritual fellowship with the whole staff working together, reinforcing the school’s core values. As one teacher said, although the delivery team was from an independent school, it was clear their message was ‘not just for rich kids’.