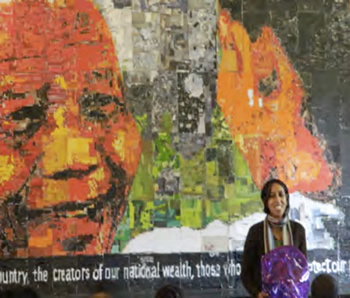 South Africa celebrated Mandela Day on July 18. To mark the occasion this year, a St James Johannesburg parent helped the pupils to create a remarkable mosaic of Mr Mandela. Mrs Usha Seejarim (above, with the mosaic) is a leading South African artist, and her design required the children to cut small pieces of colour to fit into the final work, without knowing what the final result would look like.

‘I wanted to create something that came together collectively, so that individual parts add to the whole’, Mrs Seejarim said. ‘The magic of it lay in its coming together.' The children were most impressed with the result.

Johnson Aladelusi, aged 9, said the artwork ‘means something special because it’s about Mr Mandela. He spent a lot of time fighting for our country.

’Christopher Park, aged 11, said he was ‘speechless and amazed’!

The children weren’t the only ones impressed. A Dutch TV crew made a film of the mosaic, shown that night in Holland. The South African newspapers featured it too. Chairman of Governors William Wooldridge says the mosaic has drawn gasps ofadmiration countrywide both for its accuracy and its profundity.

The day after Mandela Day St James hosted a Mandela event, with video clips of his life, debates and an inspirational talk on how his life has demonstrated compassion.