Work in Progress - Why Does St James Teach Sanskrit? 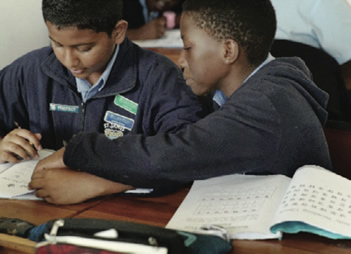 Namaste - a socially distanced greeting which many schools have used in place of the usual handshake for pupils at the school gate. It is good to know that Covid restrictions can bring to schools the opportunity to try new and good things.
Namaste is a Sanskrit phrase usually translated as, “A bow to you.” It is accompanied by the gesture of joining two palms together, placing them at the heart level and bowing one’s head. It is a beautiful greeting to receive and perform.
‍
You will know some Sanskrit words - avatar, bandana, guru, karma, mantra, nirvana, pundit - and other words derived from Sanskrit - candy, cashmere, cheetah, crimson, ginger, jungle, lilac, sugar, zen - and my favourite, juggernaut.

An academic edge - At St James Prep, we study Sanskrit from an early age. Much beloved by our pupils and parents - especially those who practise yoga (a Sanskrit word) - it takes time and application to learn. It is not easy, and it is very different. But our pupils master Sanskrit and love it, because it repays their enthusiasm and effort with an understanding of a language which flirts with perfection. It gives them a similar academic edge and advantage as studying Latin and Greek; but it is ours as a school - we are almost alone in teaching it - and that is a source of pride and excitement.

Beauty and wellbeing - The sounds of Sanskrit words and sentences have musicality and richness of tone which make it a ‘performance’ language. One has to say the words to embrace their beauty. Some say the very act of speaking Sanskrit is soothing and enriching. And, in articulating it, pupils have to find ways of mastering sounds and breathing which are outside our western tongue. Like singing, it trains the voice and gives a sense of release and joy. Pupils have to concentrate and be in the moment to truly embrace the language – things that we know support wellbeing.
‍
Cultural awareness - Sanskrit carries a warmth of content and academic rigour in its form and precision, but also a spirituality, beyond religion. Take a look at the lyrical beauty of this Sanskrit prayer, and the importance of the words:

By year 3, our pupils are able to recite this prayer in Sanskrit and English. Studying Sanskrit from an early age broadens the mind; heightening the children’s awareness of a culture that is often very far from their own. Sanskrit is one of their fondest memories of St James Prep and they take its rigour and discipline to senior school, and beyond. They have a deep understanding and experience of something beautiful and important, of which most adults know very little. For them, that is a source of deep self-confidence and pride.