Work in Progress - The lifeline of a good education 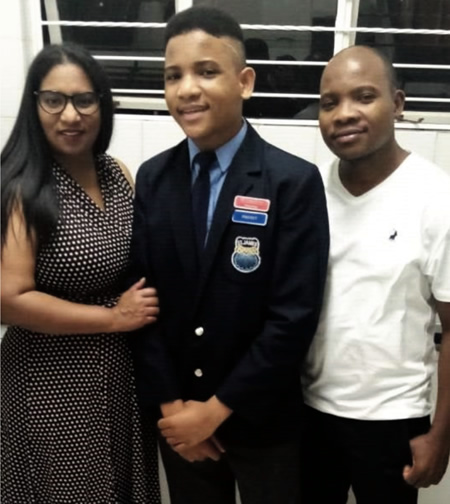 The riots in South Africa six months ago are still fresh in our minds. During the riots Jessica Renison, who fund-raises in the UK for St James Durban, sent her donors a much-needed story of hope. With apologies to those who will already have seen it, here is part of what she wrote.

“When I last spoke to headmistress Lisa Welthagen, the riots in the city were at their worst. The school had broken up for the holidays a week or so earlier and everyone was barricaded in their homes. Fires were erupting throughout the city. All shops, including food stores, pharmacies and doctors’ surgeries were closed or had been abandoned to looters. Today St James re-opened for a new term, all students and teachers present and correct, ready to carry on as normal. Despite some parents having lost jobs, and more expected to do so. I asked Lisa what I could share with St James’ supporters around the world, and she told me about Shaun.

Shaun Gasa joined St James in 2015, the year the UK fundraising team visited the school. At the time we interviewed various parents, and Shaun’s father’s response stood out for its heartfelt honesty. He said:

'I would like my son to be a respectable, intelligent human being. I would like him to be the best he can be. In my own education I was not equipped in areas that mattered. St James is giving my son the opportunity to excel by giving him a strong foundation. My hopes are that he will become a productive member of society and will feel wanted.'

Six years, on Shaun has been offered academic scholarships to two of Durban’s best High Schools.”

Shaun (pictured here with his parents) says of his time at St James:
‘I value most my teachers and the life lessons they have taught me because that is what has nurtured me and given me the confidence to be who I am today.’
‍

These short articles about our work and the schools we support have been posted on the website over the past 20 years.

New Heads
Thinking Through Philosophy in Grenada
Durban Story
Another Day, Another INSET
Thinking Through Philosophy
We Carry Each of These Children in Our Hearts
Bridging the Community Divide
Teacher-Training in the Squatter Camp
First ERT workshop in Johannesburg
Regenerating an Urban Community in Johannesburg
Among the most Inspiring Months Of My Life
The lifeline of a good education